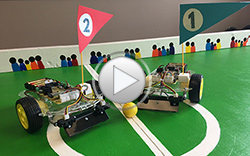 Each team has one robot car on the field. A colored flag is attached to each robot car so that it is easy to see if it belongs to the red team or blue team. The game is played on a smooth wooden surface that is painted to look like a soccer field. There is a net on both ends of the field for the goal. The robot cars try to score points by pushing the ball into the opponent's net.

If you are interested in getting started with a development kit that uses EZ App Lynx, view the EZ App Lynx w/ RN4020 Development Kit.